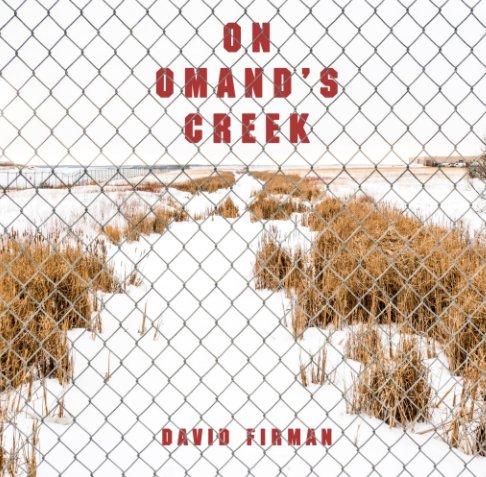 On Omand's Creek is part of the Ways To Walk series of small softcover books documenting—through photography, prose and map graphics— short walks in search of nothing in particular other than some vague understanding of where I am at any particular moment.

Here’s a small excerpt from my essay for On Omand’s Creek:

There is a mechanical precision to the course of Omand’s Creek, one drawn on a drafting table in an engineer’s office rather than prescribed by the vagaries of nature. An early map, Plan of the Settlement on Red River, as it was in June 1816, shows a scraggly Catfish Creek, as it was then called, winding its way in a southeasterly direction to the Assiniboine River (or the Ossiniboyne River or Western Branch of the Red River, according to the map). Catfish Creek was later renamed Omand’s Creek, after John Omand (1823-1905), who lived near its mouth. By 1946, City maps show a much different path for Omand’s Creek. Other than having the same meeting point at the Assiniboine River, the course of Catfish Creek in 1816 is completely different from that of Omand’s Creek in 1946. Since 1946, the creek’s route has been modified even further, being aligned ever more closely to the grid of streets closing in around it.

I’m heading north on that most recent realignment. The creek is broader, a flat expanse of clean, white, deep snow. The heavy industries hang back from the gently sloped banks, giving it—and me—room to breathe. A parkland, so-to-speak, surrounded by super-scaled tin sheds, rusting machines and gantry cranes. Then the creek turns left and due west. The trail is getting tough now. The snow is deep. I can feel my thighs ache with every laboured step. In places, the bullrushes are thick, forcing me to battle my way through or give up and climb the steep bank to circumnavigate a particularly impenetrable patch. A number of bridges cross overhead. Most tunnels I can navigate, hunched over. A few are just too low. I must climb up and over.
Author website
http://www.firmangallery.com

David Firman has participated in solo and group shows across Canada and in Europe. His work is represented in several collections including the Winnipeg Art Gallery, the Canadian Museum of Contemporary Photography (Ottawa) and the Canadian Centre for Architecture (Montreal). For further information, visit www.firmangallery.com

Get access to exclusive email
offers when you join the Blurb
book-making community.