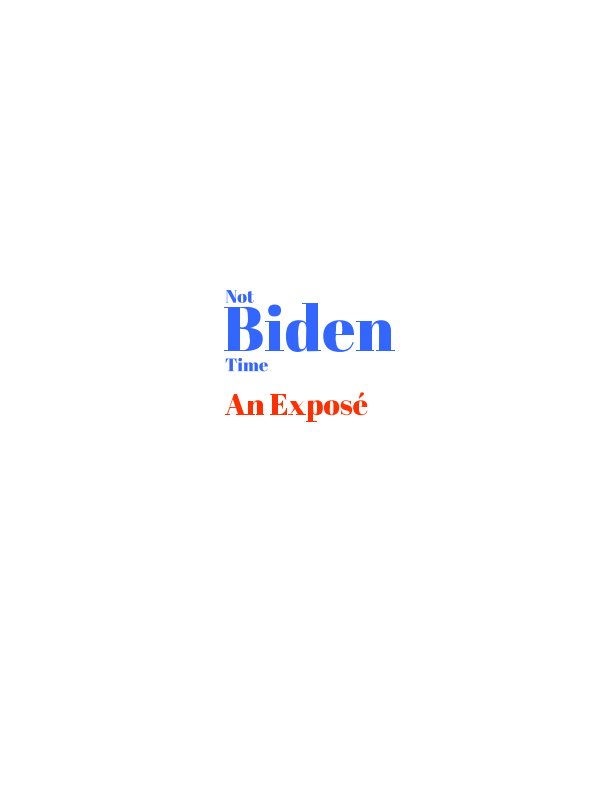 Well, old middle class creepy Uncle Joe from Scranton (although he hasn't lived there in decades) is running for president again, for the third time. Gaffe prone, plagiarism driven, cosmetically self absorbed, and on the wrong side of most major issues during a career in politics (only) spanning nearly 50 years, Biden hopes to ride the tattered coattails of Barack Obama, whom he served as a sycophant straight man and VP, to become the oldest ever US president. After weeks of waffling and Hamlet like uncertainty, Biden entered the race late, but surged to the lead in the polls (where he remains) by claiming to be a moderate in comparison to his leftwing Democrat moonbat rivals (all of whom have now dropped out), despite flip-flopping on long held positions and controversies. Can "Plugs" smile his way to success this time, after two previous campaign disasters? This brief tome suggests, through Biden's own words and actions, he's on yet another fool's errand, proving Potomac Fever can be addicting even to senior citizens. And don't be fooled by uncle Joe's dopey persona. As others have pointed out, Biden is a vicious, conniving political animal. Not Biden Time is the third book in a political satire series on Democrat presidential hopefuls. Oh, No and Yes: No! A sequel, are both available in the Blurb on line bookstore. This is the 3rd edition of Not Biden Time, revised in March 2020.

Mostly photographs of New England landscapes and seascapes with emphasis on Maine, NH, and Martha's Vineyard. Also images from travels to Bermuda, Montana, NY Adirondacks, and Florida. Large collection of "serious croquet" photos from many venues in the U.S. Portfolio also includes "PhotoTransformations"—manipulated images reproduced as painting-like images. Other publications available through Blurb.com are edgy, humorous political commentaries on the presidential aspirations of Hillary Clinton and Joe Biden, and a shorty memoir of my one-year tour of duty in Vietnam (1967-1968).